Puritan was founded in 1927 by Mr. Walter J Charnley. Charnley was an inventor who was intrigued with machinery and equipment that could be used in the food chain. He patented several items including a batch process Grain Puffing Machine and a Molasses Mixer that had provisions for injecting molasses to a feed mix for cattle. 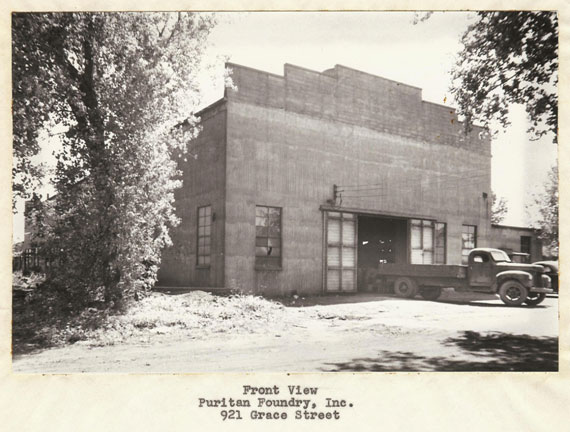 Above is the earliest know picture off Puritan Manufacturing, Inc. When it was founded in 1927, the plant was located just off 11th Street north of downtown Omaha. During the 20’s…these are some of the things that happened around that time frame… 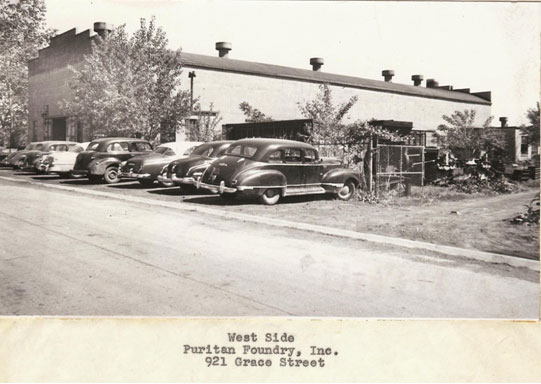 This photo of Puritan Manufacturing, Inc. was taken in the late 1930’s. Significant events in history in the 1930’s included. 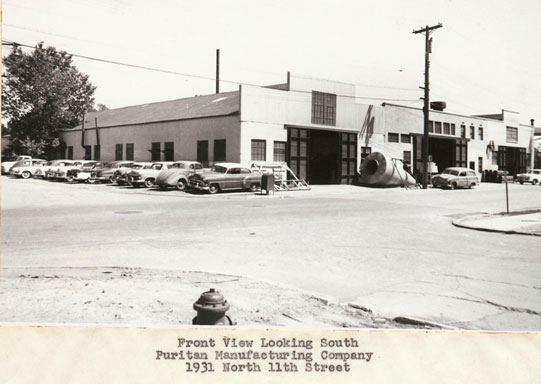 Above is a picture of Puritan Manufacturing, Inc. in the 1940’s…here are some of the events in history that were happening then. 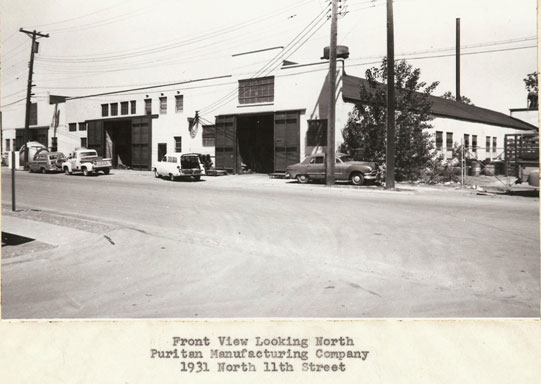 Here is a picture of a tank fabricated by Puritan Manufacturing, Inc. from the 1960’s…these are some of the events around that time… 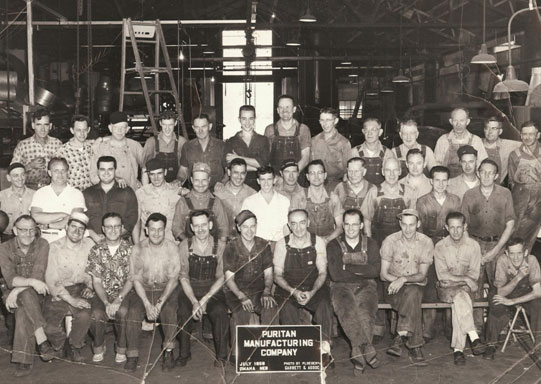 This is Walter Charnley’s Puffing Machine Patent issued in 1939 and a Molasses Mixer Patent that he established in 1929. Puritan still fabricates the Puffing Machine and sells these units all over the world. 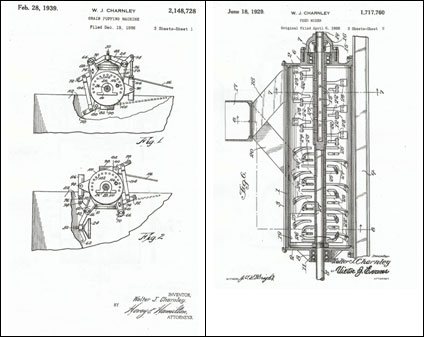 This is a book on Breakfast Cereals and how they are made. This book was used as a text book at a major university that trains engineering students regarding cereal production. 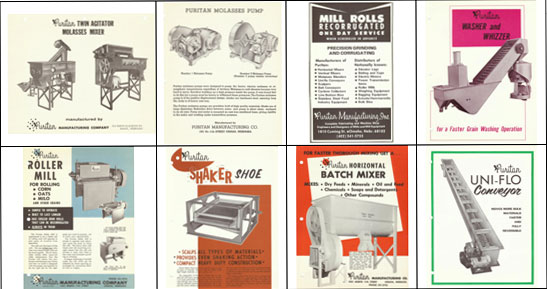 In the late1950’s Puritan Manufacturing, Inc. had relocated to 18th & Cummings Street. They occupied back half of a 8,000 sq ft building. Wallace F. Walter had retained ownership from Walter Charnley and was operating the business up until 1963. At that time, a young Mechanical Engineer from Carrol Iowa Joseph F. Waters, a graduate from Iowa State University and former Ford Motor Company employee purchased part interest in the company. Joe had been the Manager of Operations for Gate City Steel prior to this and had always wanted to get into the steel business for himself. Initially Joe purchased a part interest, a few years later year later he would purchase full interest in the company with two other investors, Chet McCurty and Dr. Keith McCormick. Chet was an experienced accountant that helped Joe, while Joe concentrated on sales.

Waters worked hard to keep the company viable…he created an extensive sales book that included all the products that Puritan represented as well as offering the ability to customize any piece of equipment or create one from scratch. He relentlessly called on customers to offer solutions to their business problems. Soon he established a foothold in the specialty fabrication market in the Omaha and surrounding area. Puritan became know as a company that could provide products and services to businesses that truly added value to their bottom line.

As the company grew it needed more space, eventually they occupied the entire building at 18th & Cummings while renting additional space at the Carter Sheet Metal Plant which was located at 1301 Willis Avenue. Eventually in 1973, Joe purchased the assets of Carter Sheet Metal from Carl Cordes and moved its operation to that location. A year later Joe purchased sheet metal company in Millard to specialize in stainless steel fabrication, but after realizing that his resources were too spread out he ceased operations there just one year later.

In 1977, Joe built an addition onto the Carter Sheet Metal facility with added equipment and overhead crane capability, this drastically increased the capacity of the facility…it provided the ability to do difficult and larger fabrications with greater ease. 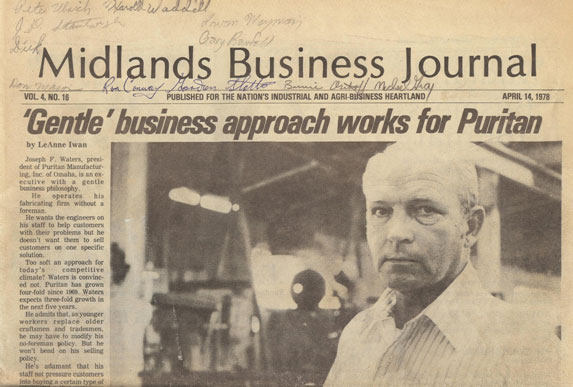 Above is an article about Owner, Joe Waters and Purtian from 1978…."Gentle Business Approach" Joe…bought interest in 1963 so at the time of this article he had been operating the company for 15 years. (note the article is signed by all of the employees at that time) 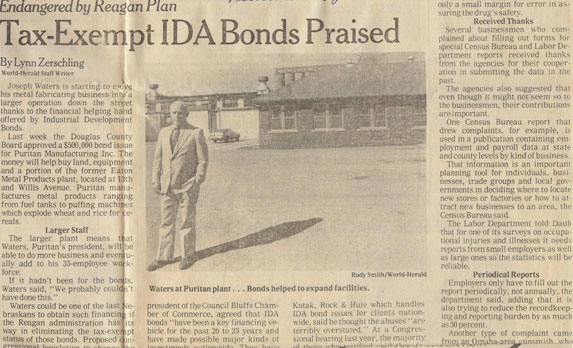 Article from 1980 describing how the IDA bonds, Industrial Development Bonds enabled Waters to purchase the Eaton Metal Fabrication Facility, which was just down the street from their location at 13th & Willis Ave. This increased the fabrication space to 175,000 square foot under roof along with increasing the fabrication capacities with the added equipment acquired.

In 1979, Waters son Bill went to work at Puritan, Bill had a teaching background and had to learn the steel business….approximately 10 years later, after going to night school and picking up classes where he could, Bill specialized in Mechanical Engineering and acquired his Professional Engineering License from University of Nebraska. In 1980, Waters other son David who also had a teaching background along with a degree from University of Nebraska in Industrial Technology went to work at Puritan as well. 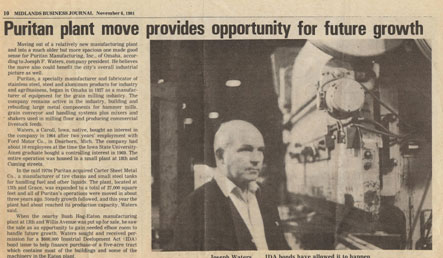 Article about settling in to the new plant. 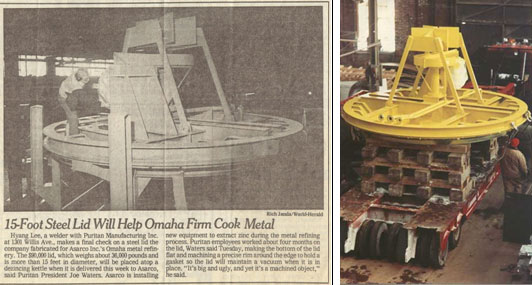 This is an example of the large fabrications that are produced at Puritan.

Above is 1987 article on Puritan Manufacturing, Inc. Since Joe had started with Puritan in 1963, sales had increased almost 20 times by this time. 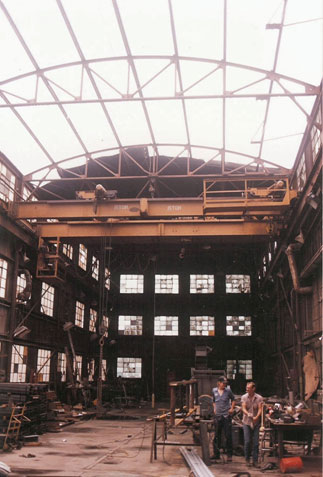 On July 15th, 1988, a tornado took the roof off of one of the buildings it then continued on to Council Bluffs where it caused extensive damage, luckily, no one was injured.

In 2001 there was a fire that destroyed the old Carter Sheet Metal plant, the building was built in the late 1800’s. The addition that was added in 1977 was salvaged while 20,000 sq ft portion of the building was a total loss. 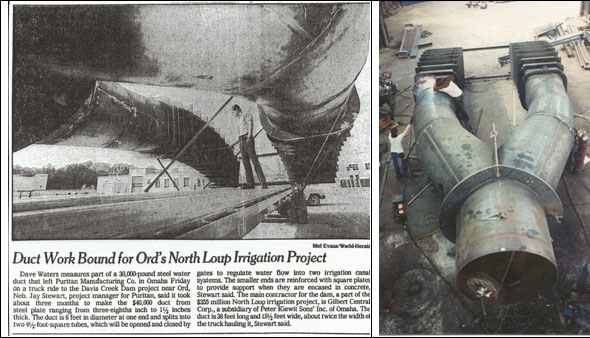 Despite setbacks Puritan Manufacturing, Inc. was able to endure and continue to provide quality fabricated specialty products to it’s customers. Above is an example to a difficult fabricated component for an irrigation project in Nebraska. 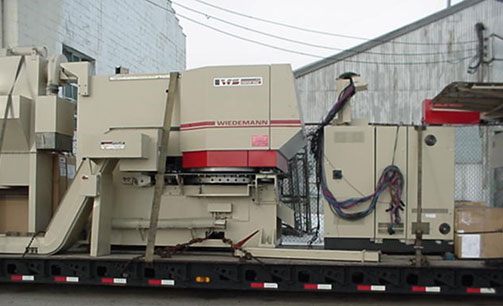 New equipment arriving to be installed at Puritan.

Puritan continued to add new equipment and CNC controlled machinery to improve accuracy and quality of the parts produced. In addition to that, they invested in computer software to aid in the detailing of complicated assemblies and components. 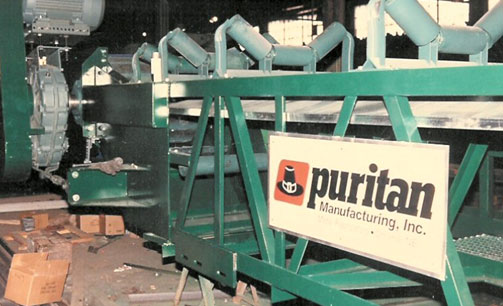 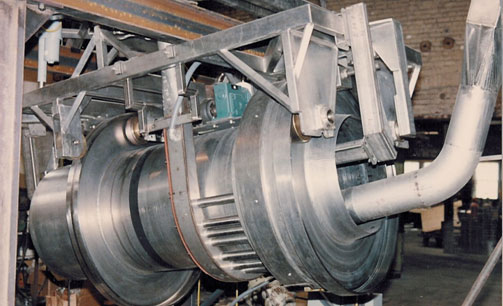 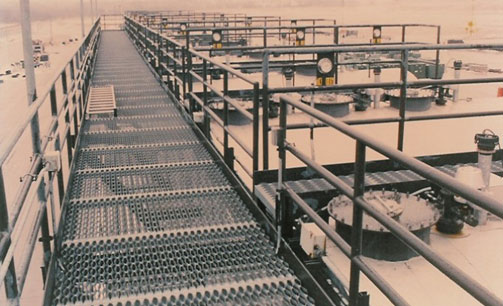 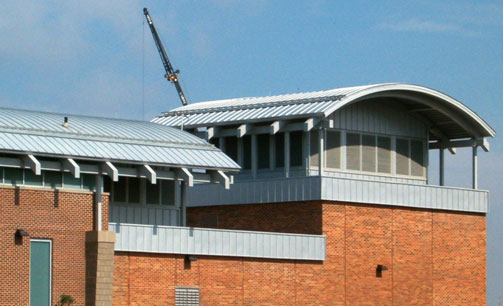 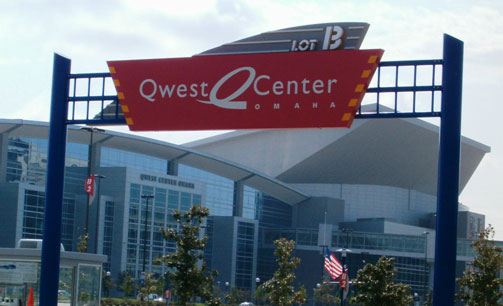 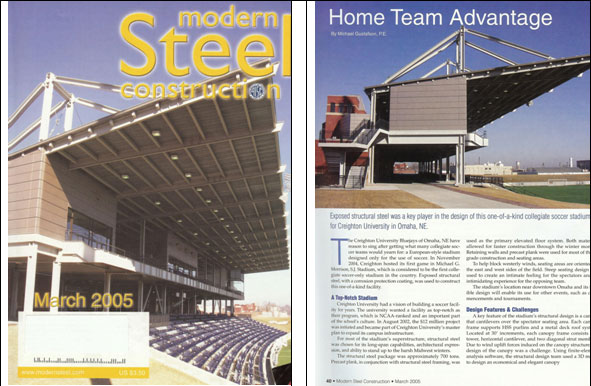 Puritan fabricated the railings and the stairs for the Creighton Soccer Complex.

Puritan fabricated this walkway bridge on the east side of the Qwest Center Omaha… won awards from the American Galvanizing Association for design in 2004. 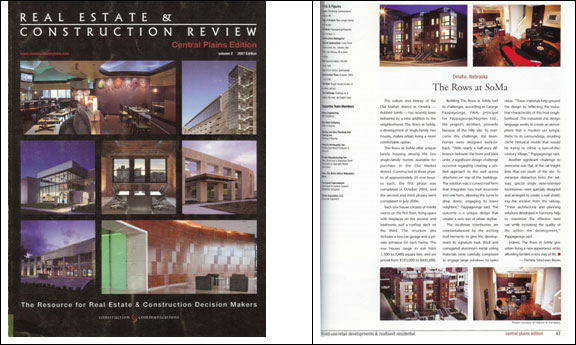 Puritan fabricated the structural steel and ornamental items for the SoMa project in Omaha. 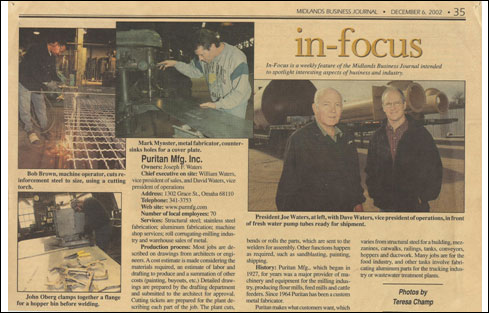 Fresh water pump tubes ready to ship to the State of Washington. 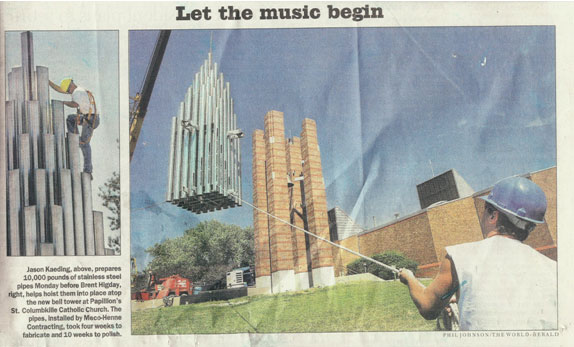 Puritan has always been a preferred fabricator for ornamental projects such as the on shown above, the polished stainless steel Bell Tower for St. Columbkille Catholic Church in Papillion Nebraska.

Bell Tower, being set into place. 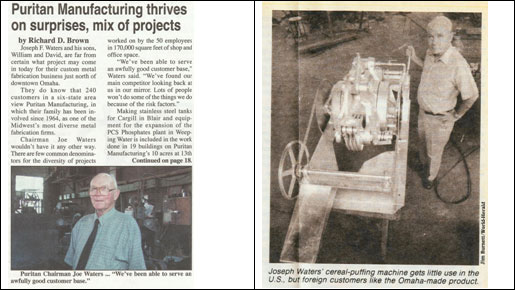 Puritan Manufacturing, Inc. featured in article from 2004, and an article about exporting products from Nebraska. (Joe with Puritan Puffing Machine) 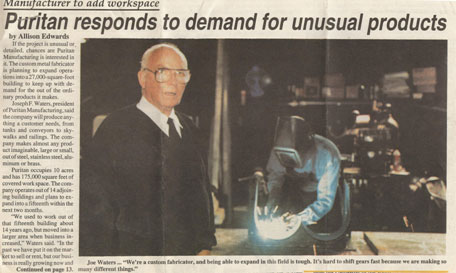 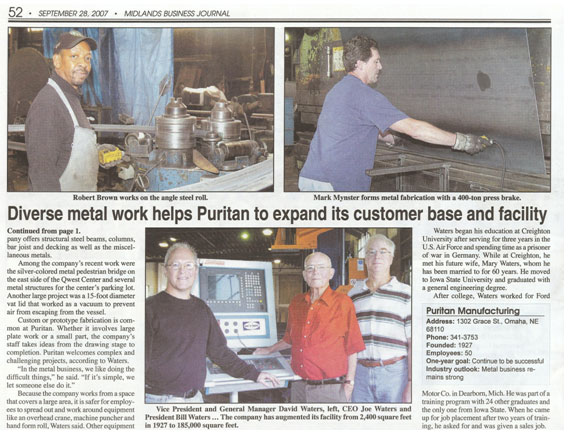 Joe continued working up until his death on January 27th, 2008. Puritan was his life’s work, he took great pride in the fact that he grew the company into such a viable business while providing goods and services to his community and ultimately improved the lives of the people in that community.

It was his hard work and his adherence to the golden rule… "treat others like you would like to be treated yourself" that enabled him to be successful. He treated his employees like family…he would always say that they were the company’s biggest asset. 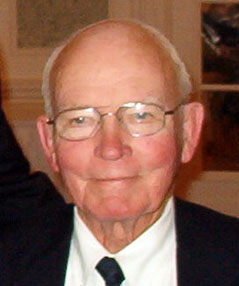 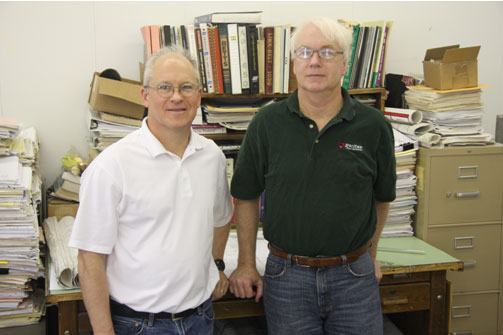 President Bill Waters and Vice President David Waters continuing the Puritan tradition of providing quality products and services… between the two of them they have 60 years experience in the steel business. 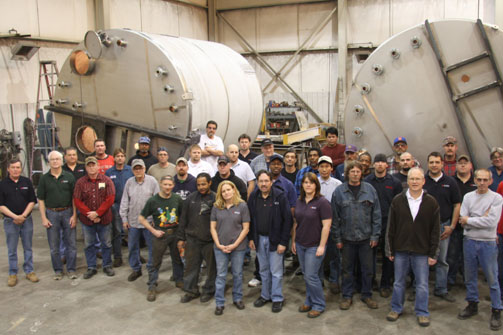